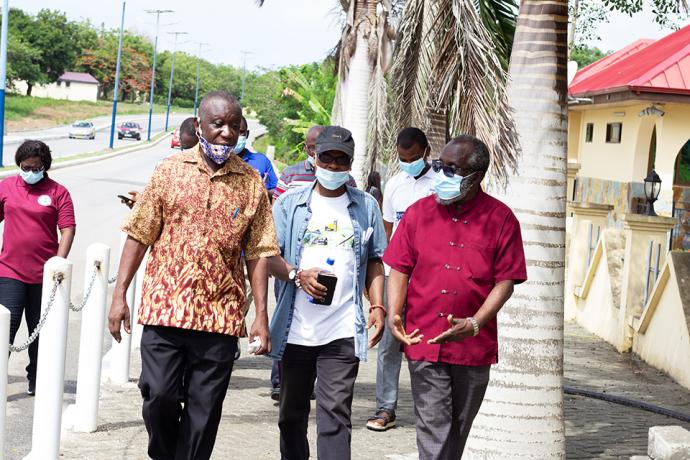 The Centre for School and Community Science and Technology Studies (SACOST), UEW in collaboration with SHAPE Attitude Ghana, toured some areas at the North Campus of UEW on June 5, 2021 to mark the 2021 World Environment Day (WED). The tour included officials from the University of Education, Winneba (UEW), Ghana Education Service (GES) and Environmental Health and Sanitation Department, Winneba

The Head of SACOST, Prof. Kolawole Raheem, indicated the exercise was to draw attention to a stream that was becoming depleted at the North Campus.  Considering “Ecosystem Restoration” as the theme for the WED, Prof. Raheem denoted it was time for the University and its stakeholders to begin discussions towards resuscitating the stream. According to him, the stream was once free flowing, had fishes and a serene environment worthy to have been protected. In his view, assisting the stream to recover will revive the fishes and ultimately, become a source of learning for students studying biology. To begin steps towards reviving the stream, a signpost was erected on the bank of the stream to draw the attention it.

The Director of SHAPE Attitude Ghana, Mr. Wonderful Baisie Ghartey in his remarks revealed that, his organization has been working closely with SACOST on the environment since 2014. According to him, SHAPE Attitude is focused on sensitizing the younger ones in the community against littering and open defecation. Mr. Ghartey entreated SACOST, SHAPE Attitude and stakeholders present to continue pulling resources together to deal with indiscriminate littering.

Mrs Mable Judith Micah, the Director of Education, agreed with Mr. Ghartey that it’s certainly imperative for all stakeholders involved to harness resources together for a better environment. She intimated that, it is the role of educators to sensitize school children and communities on the maintenance of the environment to sustain life. She attributed inadequate rains and damaged water bodies to human activities that are harmful to the ecosystem. She therefore implored for a change of habit towards the environment.

Former Dean of the Faculty of Science Education, UEW, Prof. M. K. Amedeker commended the exercise adding that reviving the stream and keeping its surrounding serene can serve as relaxation place for both students and lecturers in the University. He expressed that while the University is expanding, measures should be put in place to ensure that the environment is sustained at all times.

The Environmental Health Officer, Mrs. Susana Martinson, stated that her outfit has always been happy to join SACOST to celebrate the WED. To her, it provides the opportunity to remind people on the essence of protecting the environment. She added that as the world is talking about restoring damaged ecosystems, people should begin making smart choices such as considering paper bags over its plastic counterparts.

Also present at the occasion were Mr. Agbeshie and Dr. Pajibo, all at IERIS, UEW and staff from SHAPE Attitude Ghana.