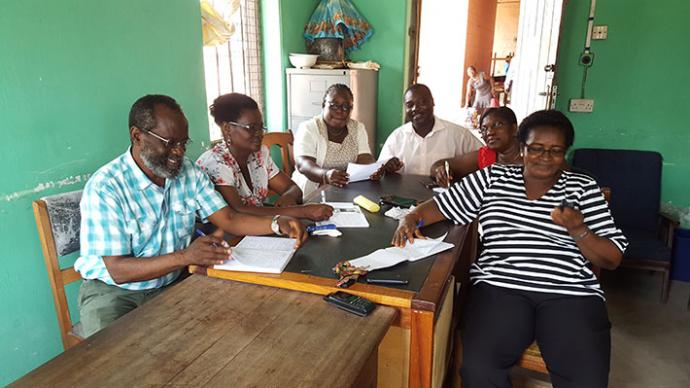 The Council of Churches Winneba Branch and the Ghana Education Service of the Effutu Municipality have restated their collaboration to work with Shape Attitude Ghana in the campaign against indiscriminate littering and dumping of refuse as well as open defecation. The assurance was given to the Director, Shape Attitude Project, at separate meetings with the organisations on 12 and 18 January 2016.

The meetings were held with heads of religious bodies in Winneba and the inspectors of schools from the Education Service, Winneba, to discuss activities for 2016 and the role of the churches and schools.

The Director of Shape Attitude Project outlined the challenges with indiscriminate littering and dumping of refuse, the negative consequences of diseases and unattractive environment, including the beaches. The diseases cost money to treat and ill health is often associated with loss of productivity while the dirty beaches drive away tourists with loss of revenue.  While cleaning the surroundings is a good practice the Director emphasised the importance of avoiding the littering instead of dirtying the environment to be cleaned.

The Chairman of Council of Churches, Rev, Francis Odoom, pledged their support and said the churches will engage their members in the awareness campaign. Shape Attitude messages will be part of the churches’ programme, especially among the associations such as men’s, women’s and youth fellowships, Sunday schools and others.

The Ghana Education Service was requested to look at the feasibility of including litter free compounds in the criteria for awarding best schools in the Municipality. The Director of Shape Attitude Project, Mr Ghartey, seized the opportunity to announce a planned competition among the schools. The competition will be based on schools with litter free compounds and gutters and able to extend it to between 50 to 100 meters radius of their compounds for six month. The modalities for the competition are under discussion. The Director urged the school inspectors to actively encourage the establishment of Shape Attitude Clubs and ambassadors in the schools where not only the pupils will be members but the teachers will be part of the crusade.
Consultations will continue to be held with the Council of Churches and the Education Service on the implementation of the proposals.

In the picture are the team of the school inspectors and the officer in charge of health..